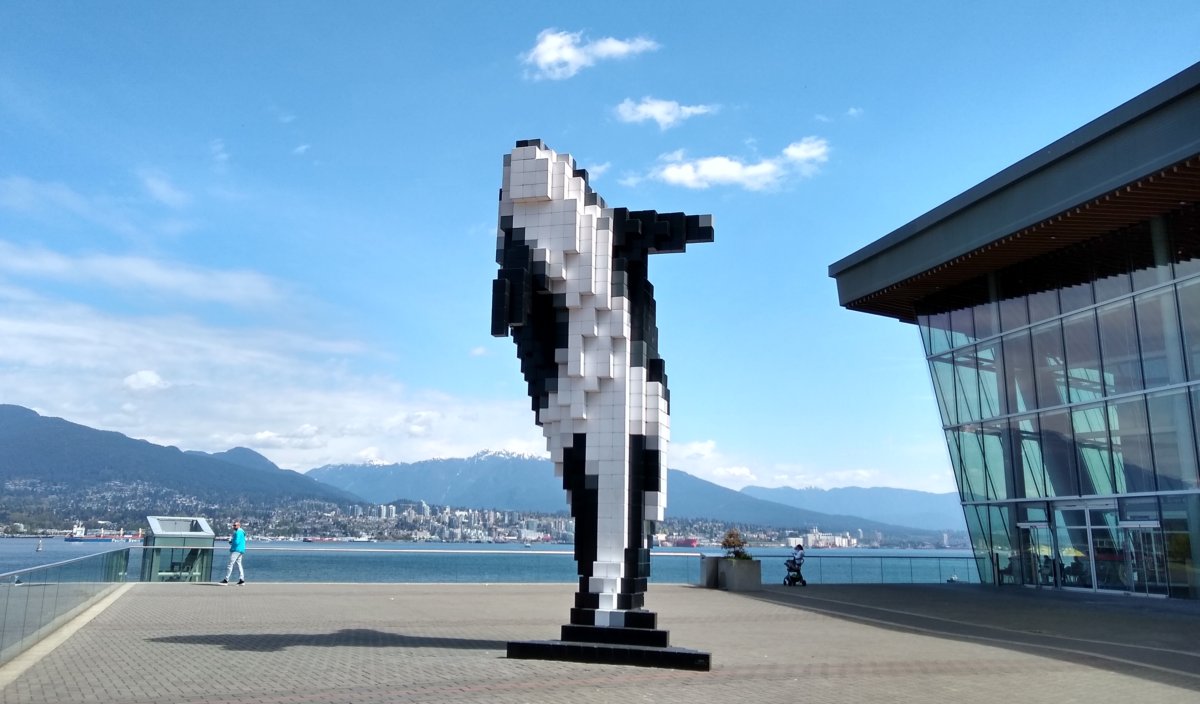 “Digital Orca” sculpture outside of the Vancouver Convention Center.

These notes from May 1 are the continuation of a few articles about my time at ARVO. You can read a summary or my notes from the other days here: Friday, Sunday, Monday, Tuesday.

Aleman presented more follow-up data from this phase I/II clinical trial that was performed on 10 CHM patients. These results are really now 3 years out from surgery. Half of the patients were given a low dose and half were given a “high dose” of vector. This was injected subretinally under the fovea. Only one eye was injected for each patient (their “non dominant” eye was chosen based on patient preference). Only 1 injection was used during surgery, unlike the “multiple bleb” approach that is used by others. The patients were not given a fixed volume of virus, instead the amount injected was proportional to the amount of remaining fovea. 4 patients ended up needing cataract surgery which is common when a vitrectomy is performed.

Following surgery every patient had a decrease in foveal thickness which took up to 6 months to return to baseline thickness. There were no surgery related complications. One patient lost a significant amount of visual acuity, but had recovered to 17 letters below baseline by the time of this presentation. Excluding this patient, here is a table of the mean results compared to baseline, which were not significant:

This special interest group featured some overview talks about the use of AI in research. A particularly effective use is in image analysis of FAF and OCT(A) images to assist in diagnosis of different diseases. A question was asked about the black box involved in using algorithms to diagnose patients. The response to that was that there is already a black box when an ophthalmologist diagnoses a patient. Delia Cabrera DeDuc had an insightful quote: “AI is not going to replace physicians. But the doctors who don’t use AI are going to be replaced by those who do.” The other speakers included Sina Farsiu, Ursula Schmidt-Erfurth, Sam Kavusi, and Ygal Rotenstreich.

This study measured CHM patients ellipsoid zone length, length of posterior outer segment, and foveal thickness and correlated them with visual acuity and automated static perimetry. They found correlations between visual acuity decline and the shrinking of all three of these anatomic measurements. While this study did not uncover anything incredibly new of exciting it is important to link anatomic endpoints to clinical endpoints for better study design.

David Birch conducted the analysis of this dataset of 20 patients from the 4D Molecular Therapeutics natural history study. The study found that annual change in ellipsoid zone length was significant in 3 out of 4 meridians sampled. Here is a table displaying the change in EZ length over 1 year in microns (um) and the corresponding p value:

This poster presented a family with choroideremia diagnosed in the Target 5000 study in Ireland. 2 “carrier” females from the same family were genotyped and studied in detail. Both had poor night vision and displayed more severe retinal degeneration than what is normally seen in female carriers. They authors made the point that we should refer to females as generally mildly affected instead of just “carriers”. Sometimes that effect is greater in cases like this. Usually when females are affected by choroideremia it is attributed to skewed X-inactivation (lyonization), but to have two affected females in the same family is an interesting finding. The authors hypothesize that the severity of the mutation may have something to do with the severity of the disease. Their mutation is a large deletion 20kb up and downstream of the CHM gene. I don’t agree with this hypothesis, unless they believe that there are other genes or factors disrupted by this mutation (which may be what they were getting at). I think this could be a case that warrants further study as it may help us better understand why some choroideremia patients progress faster than others. These females may have other mutations or factors contributing to their poor vision.

This study used a model to determine the cost of having choroideremia and how cost effective a gene therapy treatment would be given a certain success rate when delivered at different stages of disease progression. They estimated a success rate (halting progression) of 93%. This table summarized the Quality-Adjusted Life Years that a gene therapy would give patients at different stages of disease, and whether the different prices are cost effective.

They found that gene therapy for choroideremia was not very cost effective in the short term because of the slow rate of progression. However over a lifetime the treatment became cost effective. This work is important when getting insurance companies to consider covering treatments at fairly high price points. It is a difficult thing to model, but I wish they had included the possibility of a treatment failing and causing damage instead of just not working. These treatments always have a risk of going poorly and I think that is an important aspect to consider when determining if a treatment is cost-effective. Factoring in a 1% chance (a random number) of blinding a patient would change the QALY calculation.

This group developed a convoluted neural network to detect and classify rods and cones from both non-confocal split detector images and confocal images. When compared to manual graders (the gold standard) they found a sensitivity and false discovery rate of 0.968 and 0.042 for cones and 0.885 and 0.130 for rods.

See my notes from Thursday here.